The Round Top Antiques Shows History began with one woman and one building.

In the fall of 1968, Emma Lee Turney established a two-day “country antiques show with unsurpassed standards of excellence” and called it the Round Top Antiques Fair. The consummate businesswoman and Houston insider understood that the fledgling event’s success depended on mixing the business of high-end antiques with the pleasure of a much-anticipated social event.

Decades later it’s apparent that Turney was on to something.

“. . . the Round Top Show is uniquely itself. It’s always great for shopping, terrific people watching, a good excuse to go off your diet a little and a chance to walk in the boots you were born to.” – Emma Lee Turney,Denim and Diamonds: The Story of Emma Lee Turney’s Round Top Antiques Fair (1998)

Except for the smoke that rose from the barbecue pits at the rear of the Rifle Hall, the air was crisp and clear. It crackled with anticipation as 22 (or 24 or 26, depending on whom you ask) of the state’s top antiques dealers brought the best of their collections to Round Top the first weekend in October 1968. No contracts were signed. Merchandise was offered by those invited dealers who passed Turney’s stringent standards for authenticity and provenance.

“Emma Lee was a purist,” said Charlie Ham, who attended the earliest shows as a shopper and later, along with his mother, became one of Turney’s dealers. “For her it was fine American, including early Texas antiques, or nothing. Round Top was a purists’ show.”

Knowing their money would acquire investment-quality pieces, antiques collectors, many from the ranks of Houston’s social register, lined up and waited for Turney to open the doors and grant them access to the treasure trove of one-of-a-kind originals. Typically, the women power shopped, and the men gathered under the historic oaks swapping stories and drinking cold beer. It was not uncommon to have change from food and beer purchases counted back in German.

“It was a welcoming gathering,” said Nancy Krause, owner of Nancy’s Antiques in Brenham, who was one of the original dealers and still has a booth at the Original Round Top Antiques Fair. “It was a just a place where people wanted to come and spend their time.”

“It has been a challenge—and a great pleasure—to sponsor, manage, produce and host this country show. . . Taking the risks, setting the standards of excellence in country show and the loyalty found in both patrons and dealers has made every minute of time and every penny of every dollar invested worth it. . . .” – Emma Lee Turney, Denim and Diamonds: The Story of Emma Lee Turney’s Round Top Antiques Fair (1998)

Collecting and selling antiques can be highly competitive, but at the early shows the competition was always friendly. “The camaraderie that existed defies description,” Ham, who recounted tales of dealers two-stepping down the show aisles, said. “Dealers counted down the days until we could see each other and see our clients who came to this show. Clients marked it on their calendars, and it was a priority. Round Top was—and is—a relationship place.”

With that said, it certainly didn’t hurt that Ima Hogg, Faith Bybee and Hazel Ledbetter, the triumvirate of movers and shakers, preservationists and philanthropists with homes in both Houston and Round Top, supported the show and encouraged their friends to attend.

“Those women had vision and influence,” Krause said. “I’m sure it was their support, because of who they were and who they knew, that made the Round Top show the place to be.”

In 1969, Turney decided to make the show a semiannual event. A few years later, she added a tent at the Rifle Hall to hold more dealers.

“We were so upset because it seemed that she was cutting the pie into smaller pieces,” Krause said. “What we didn’t realize was that those new dealers would bring their clients with them, so we all benefited.”

Ham, whose booth was housed in the added tent, concurred noting the tent’s presence created a second line of attendees “four abreast and a 100 yards long” waiting to gain access to the dealers inside. 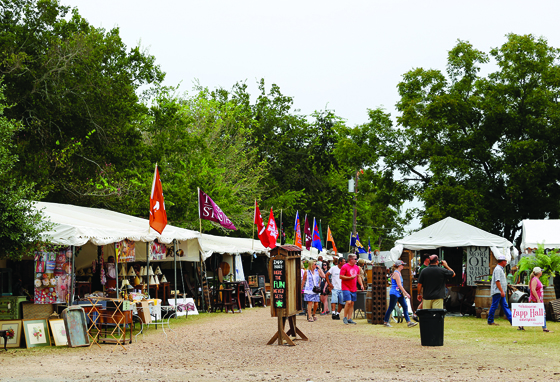 The success of the tent prompted Turney to add the Carmine Dance Hall to the mix, which then prompted other promoters to follow suit.

Soon after, the fields at Warrenton sprang to life bringing with it a spirit of competition of another kind. The dealers at the Rifle Hall were discouraged from exploring other venues. It became a game for them.

“We’d put on glasses and hats and sneak down to the fields avoiding any venues that fronted Highway 237,” Krause said. “When we’d bump into one another, we’d jokingly threaten to ‘tell on’ each other. It was funny—and big fun.”

From then on, the overall show grew exponentially every six months.

“Once it started growing, it took off with an obvious spurt every six months,” Ham said. “It’s been something to see—and be part of.” As other venues staked a claim on easily accessible State Highway 237, diverting traffic away from the Rifle Hall, Turney made a move. She purchased land near the junction of FM 458 and Highway 237 five miles north of Round Top and built the Big Red Barn, then and now home to the Original Round Top Antiques Fair. Later, she sold that show and venue to Susan Franks who continues to own and manage it today. Turney then founded the Round Top Folk Art Fair and Creative Market, now Round Top Vintage Market, which specialized in fine arts and crafts. She sold that business to Barbara Griffin and Pat Boyd in 2013.

“Emma Lee was the best businesswoman I’ve ever met,” Ham said. “When she saw that traffic patterns were changing, she changed the way she did business to ensure that she was still in the middle of things.”