In 2014, a few days before their early 50-something birthdays, which are a few days before Christmas, Katie Dickie Stavinoha and Lorie A. Woodward purchased roundtop.com and the Round Top Register, a local tabloid established in 1995. They’re still not sure what made them respond to an ad that offered the chance to own a media empire in a town with a population of 90.

But they did, and the rest, as they say, is history—albeit blurred by caffeine and an occasional bottle of red wine.

Today, aided by a cross-sectional team of specialists Katie is a jack-of-all-trades overseeing the publishing business.

Katie  initially wondered whether they could develop enough interesting editorial content to fill  four issues each year. That concern was allayed almost immediately. 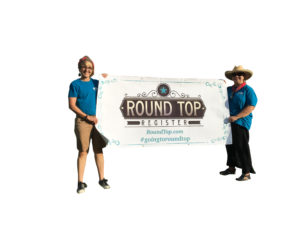 In the process, the duo grew the Round Top Register, a mercantile of ideas located where country meets city and traditions meet transitions, to an average of 80 pages. As comfortable as your favorite jeans, the Register celebrates life in the Roundtopolis—and the people lucky enough to live in it.

Even with all the meeting, greeting and introducing, the gals still had more to say, so they expanded.

As part of the first issue of the Register, they developed an antiques show map that garnered some rave reviews for its simplicity and ease of use. With each passing show, the map was nipped, tucked, tweaked and improved. It grew and blossomed like a crepe myrtle spared from crepe murder. In spring 2018, it became a standalone bi-annual publication, the Round Top Antiques Show Guide, providing “everything you need to know before you go to the show.”

What began as a 36-page tabloid published quarterly, has evolved into a bi-monthly publishing enterprise, supplemented by a 50-weeks-per-year e-newsletter. The glue  that holds the growing business together? roundtop.com.

Katie and Lorie were featured in Where Women Create Business as they were launching their publications. Katie was recently profiled by Voyage Houston.