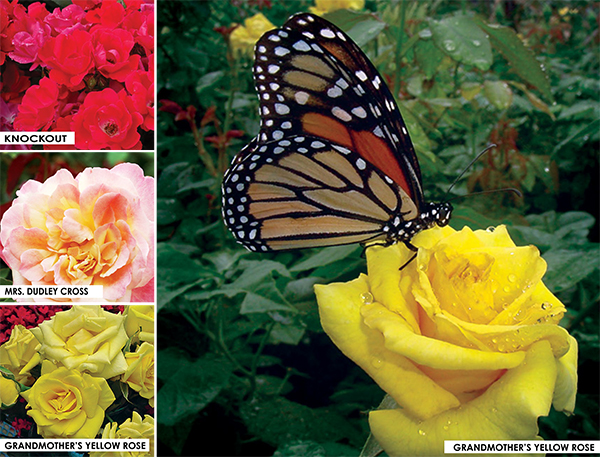 There are hardier, easier care alternatives: “tough” modern roses and old-fashioned roses, both of which are available at area nurseries. Roses in these categories are my favorites because they are drought tolerant and qualify as xeriscape plants. They can be planted in native soils and don’t require regular pruning or weekly pesticide sprays. A few even produce good cut flowers.

As you are planning your landscape, consider these hardy varieties:

Belinda’s Dream is a tough modern rose with light pink flowers. The buds and blooms rank high as cut flowers, making this a great choice for those who want bouquets. . The plants grow to about six feet tall and four feet in diameter. Like all the roses described in this article, Belinda’s Dream can survive without irrigation most years, but it blooms better if it’s watered every three weeks. Expect Belinda’s Dream to bloom eight months of the year.

Katy Road, also called Carefree Beauty Pin, is my favorite tough modern rose. It has a four-inch flat bloom that is a darker pink than Belinda’s Dream. Like Belinda’s Dream, it has a light fragrance and grows six feet tall and four feet in diameter. Expect Katy Road to bloom eight months of the year. When it comes to cut flowers, the blooms are not in the league of Belinda’s Dream, but Katy Road produces attractive rose hips all season. You can make tea from rose hips, and the birds like them, too.

Mrs. Dudley Cross is an old-fashioned rose that produces attractive cut flowers in peach or cream. It grows to about seven feet tall and five feet in diameter. Like the two roses mentioned earlier, Mrs. Dudley Cross works as a specimen in a bed or in the landscape and blooms for eight months most years.

Grandmother’s Yellow rose has a small, yellow bloom that is also is attractive as a cut flower. It’s not quite as tough as Belinda’s Dream, Katy Road and Mrs. Dudley Cross, but it still makes my xeriscape plant list. It makes a slightly smaller plant and blooms for seven months rather than eight in my landscape.

Martha Gonzales is an old-fashioned rose that grows to about four feet tall and four feet wide. It’s covered with quarter-sized, blood-red roses that provide a good show eight months of the year. Martha Gonzales is distinctive because its new foliage is red, and its mature foliage is closer to maroon. Martha Gonzales is attractive as a bedding plant in sunny hot sites such as parking lots, and it’s often used to direct traffic at public buildings. It has enough thorns to protect itself and to prevent people from cutting through gardens, but the thorns are not savage enough to cause serious injuries.

Mutabilis, also called Butterfly rose, is not a contained, disciplined grower. It reaches a height of eight feet and a diameter of 10 feet, making it a favorite nesting site for cardinals and mockingbirds. Mutabilis is a Latin word meaning changeable. The blooms, which feature a single layer of petals and eventually are three inches across, change from crimson to pink to yellow on their path to maturity. Use Mutabilis as a large landscape feature that blooms eight months of the year.

Knockout is a tough modern rose that is extremely popular in the San Antonio area. It grows to about six feet tall and four feet wide with quarter-sized blooms eight months of the year. The first and toughest version was red, but now pinks and doubles are also available. Knockout serves well as a landscape specimen rose but is usually used in a bed.