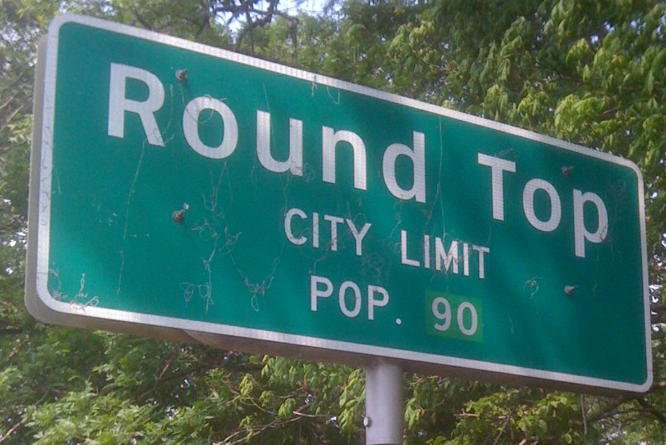 When I lived in Fayette County, the Round Top Christmas was an explosive event. Round Top was a German community, and Germans, at least in Texas, like to hold on to old customs. When I moved there in 1970, even though my neighbors’ forbears had come from Germany to Texas in the 1850s, I was the only person in town who had not grown up speaking German.

Shortly after I arrived, a new Lutheran pastor suggested a minor innovation in the church’s annual congregational picnic—something like serving strawberry ice cream in addition to chocolate and vanilla—and he was told in no uncertain terms, “The way we’re going to do it is the way we’ve always done it.” It sounds even more final in German. That could’ve been the motto for the whole community.

Until the 1950s, wedding invitations in Round Top were delivered in what my neighbors called the “old-fashioned way.” This meant the bride’s father and brothers and their friends mounted horses whose manes and tails had been braided with red ribbons and rode from farm to farm to invite their neighbors. They carried with them a big cardboard shield on which had been written, in German script, the words: “You are invited to the wedding.” It was considered impersonal and impolite to send out written invitations.

By the time I moved there, this custom had fallen by the wayside, but weddings were still followed by dances, which were public events, advertised by posters, at which the bride’s father was expected to provide beer, barbecue and music for 400 – 500 people. The dance was always opened by a grand march in which an older couple who knew the ropes led the guests around the dance floor in an intricate pattern that terminated with everyone in a circle around the bride and groom. The band would then play a waltz, and the bride and groom would have the first dance together while everyone in the circle swayed in time to the music.

There was still one family in the community, the Zwernemanns, who practiced the custom of asking friends to sit up all night in the living room with the corpse when a family member died. The Zwernemanns were a large family, and whenever a Zwernemann died, other folks were reluctant to answer their phone for a few days for fear they were being tapped for corpse duty.

Back to Round Top Christmas Memories

But to go back to Christmas. Most families in Round Top kept Christmas in the old-fashioned German way, which meant that Christmas started not on the day after Thanksgiving but on Christmas Eve. The holiday was foreshadowed, however, by a visit from Santa Claus on Dec. 6, the Feast of St. Nicholas. Before World War II, Santa Claus would go from farm to farm on the night of the sixth accompanied by his sidekick, Black Peter, whose face was blacked with cork and who took down the names of boys and girls who had been bad during the year, candidates for lumps of coal and switches.

By the 1970s, a more benevolent Santa Claus, without Black Peter, paid a visit to the town square on the sixth and asked children what they wanted for Christmas. Santa Claus was always played by Milton Schlabach, a little round pink-faced fellow who was a retired farmer and made cedar porch swings in his spare time. One year word got out among the younger children just before the event that Santa Claus was not really Santa but Milton Schlabach. Milton found out about it and gave his beard and Santa suit to his wife, who was built exactly like him, and then he paraded around the square in his bib overalls while Mrs. Schlabach took the children on her knee, and everyone went back to believing in Santa again.

On the afternoon of Christmas Eve, the men of each family would go into the woods and cut a Christmas tree, usually a cedar. While the children were distracted, the tree would be smuggled into the house and set up in the living room, the door of which then closed. A male relative, usually an uncle, would climb into the room through an unlocked window and decorate the tree and arrange the presents under it while the rest of the family was at church or visiting relatives.

After supper, the door would be opened revealing the tree and the present in all their splendor, apparently the work of a mysterious Santa Claus who had stealthily visited the house. While the children opened the presents, the older members of the family would sip glasses of whiskey and sing some of the old Christmas songs—“Tannenbaum” or “O Du Froeliche”—and then the men would go out in the yard and fire pistols and shotguns. This was the explosive part. You could tell exactly when each family in the community had opened their presents by noting where the gunshots were coming from.

I think of those years in Round Top whenever I see the Christmas decorations going up on the weekend after Halloween. We’ve made Christmas longer but I don’t think we’ve made it any better.

Editor’s Note: Lonn Taylor is a historian who lives in Fort Davis, Texas and writes columns about Texas history for the Marfa Big Bend Sentinel and Texas Monthly magazine. For 20 years, Taylor served as a historian at the Smithsonian Institution’s National Museum of American History in Washington, DC. He lived in Round Top from 1970 to 1977 when he was director of the Winedale Historical Center. This piece is reprinted from Texas, My Texas: Musings of the Rambling Boy with permission of TCU Press and was originally published in the Marfa Big Bend Sentinel on December 22, 2005.