Road Trippin’ to Round Top The Roundtopolis is a magical realm encompassing Fayette County and seven of its neighbors. As the last rural stronghold between Austin and Houston, it is a place where traditions meet transitions. Round Top is the self-proclaimed capital.

Fall is the perfect time to explore. By late September, the earth has tilted just enough to let cooler temperatures gain the upper hand. The skies seem bluer inviting you to put the convertible’s top down or, at the very least, to roll down the Suburban’s windows. Let the wind ruffle your hair. Choose a destination and go.

We’ve pulled together some suggestions for things to do and see. Granted, these lists barely scratch the surface of the area’s offerings,   but if you’re not fortunate enough live in the real magic kingdom (our apologies to Disney, but life really is better here) these suggestions will introduce you to the fun that’s waiting around every corner.

Dang it! Go outside and savor the weather. Mother Nature shows off in October. If  you and yours enjoy the great outdoors, there are four state parks within an hour’s drive of Round Top where everybody can get back to nature: Buescher State Park (Smithville); Bastrop State Park (Bastrop); Lake Somerville State Park (Somerville);  and Stephen F. Austin State Park (San Felipe). Check out (www.tpwd.texas.gov) for all of the details.

The proximity to the Colorado means you can also go paddling in a kayak or canoe. Again, use Google to locate guides and equipment if you don’t want to bring your own.

Hunting
Fall in Texas is celebrated for its cooler temperatures—and the arrival of dove season, which kicks off the hunting season as a whole. Call the Texas Parks and Wildlife Office in La Grange (979) 968-3501 to get more information on public and private hunting opportunities. If you like religious architecture and history, the Roundtopolis is a lot closer than Rome—and has almost as much to explore. Painted Churches
Fayette County is home to a famous group of Catholic churches that would be at home in the Czech Republic today. They include: St. John the Baptist Catholic Church (Ammannsville); Sts. Cyril and Methodius Catholic Church (Dubina); Assumption of the Blessed Virgin Mary Catholic Church (Praha); and St. Mary’s Catholic Church (High Hill). With advance notice, the Schulenburg Chamber of Commerce can help arrange tours of these architectural gems.

The World’s Smallest Active Catholic Church (Warrenton)
St. Martin’s Catholic Church began in 1888 as a mission of St. John the Baptist Church of Fayetteville eight miles to the west. The building is 14 foot 3 inches x 18 foot 1 inch. It has 12 benches that can hold about 20 people.

St. Paul’s Lutheran Church (Giddings/Serbin)
The mailing address places the church, which was founded in 1854, in Giddings, but it’s actually located in Serbin. In addition to being singer-songwriter Lyle Lovett’s favorite place, St. Paul’s Lutheran Church is the site of the annual Wendish Festival held on the fourth Sunday of September at the church grounds. This year’s event is schedule for Sunday, September 27. Festival Hill (Round Top)
Festival Hill, founded by renowned pianist James Dick in 1971, has grown into an international center for classical music. During the summer, students and professors from around the globe settle in for the conservatory and its attendant concert series. But the acoustically and architecturally stunning Festival Hall hosts events throughout the year. This fall offerings will include ballet, puppetry, educational forums and gala fundraisers.

Winedale (Round Top)
Shakespeare at Winedale is a summer event, but mark your calendars so you can come back and see the Bard’s work brought to life in what was once a 19th century hay barn.

Visual Art
Galleries abound, each with its own flair and focus. Some showcase local artists, while others highlight art that has traveled great distances from its point of creation. Stop in and savor the beauty. The Roundtopolis is also home to five railroad museums and 28 cultural and heritage museums with focus ranging from county histories to ethnic histories. For those who want to experience history outside the pages of a book, the Roundtopolis is where Texas was born.

Winedale (Round Top)
The complex of 19th-century structures and modern facilities situated on 225 acres reflects the area’s German-American culture. Monument Hill and Kreische Brewery State Historical Sites (La Grange)
On September 18, 1848, the remains of Texans killed in the Dawson Massacre and the Black Bean Episode were reinterred in a common tomb  at the location now known as Monument Hill.

In 1849, Heinrich Ludwig Kreische, a recent German immigrant, purchased 172 acres of land, which included the tomb. He built a three-story house and a brewery. By 1879, it was the third largest brewing operation in Texas. . 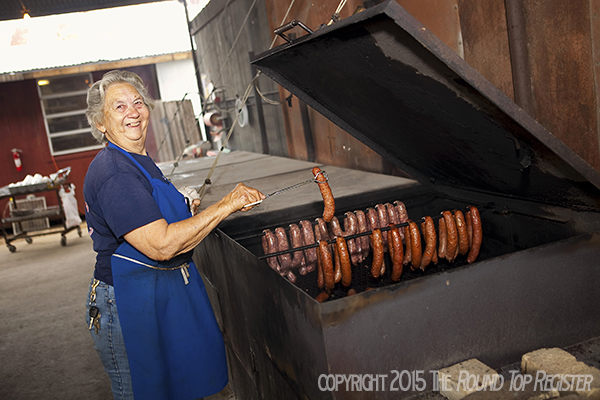 Skilled vintner and brew masters are transforming barley, hops, grapes—and even honey—into the nectar of the gods. Raise a toast to good taste. Shiner Brewery (Shiner)
Since 1909, every drop of Shiner beer has been brewed at Spoetzel Brewery (pop. 2,069). Each year the brewery craftsmen send 6 million cases of Shiner beer across the country. Tours are only available during the week though. Beer is available year-round.

Wineries
Wineries have popped up through the region like bluebonnets in the spring. Take a tour. Take a taste. Celebrate the region’s German culture with The Round Top Schuetzen Verein (Rifle Association).

Schuetzenfest
The 143rd Annual Schuetzenfest will be held on Sunday, Sept. 20 from 5:00 p.m. to 8:30 p.m.  Admission is free. The evening’s activities include the crowning of the Schuetzenkoenig (Shooting King) at 6:00 p.m. and a free dance with music by the Donnie Wavra Polka Band.

OktoBierFest
On Oct. 24, crowds will gather for the 3rd Annual OktoBierFest, which will run from 11 a.m. ­– 8:00 p.m. The day will be filled with food, beverages and fun including German wurst (sausage), imported German biers, and music by The Round Top Brass Band, Blasmusik Texas and Yodel Blitz. Enjoy the crisp fall weather under the covered pavilion and in the shady biergarten.

Both events will be held in Round Top at the Rifle Association’s Schuetzenpark (701 E. FM 1457).