Anita Joyce has a city house in Houston, a country house near Shelby and a flair for French style.

The former engineer is the wife of her college sweetheart, Kevin, and mother to two daughters: Elise, 21, and Evangeline “Evie,” 19. She is a self-taught photographer, interior designer, blogger and online entrepreneur who founded cedarhillfarmhouse.com in 2011. Today, that site alone has 80,000 unique visitors per month.

“When I started the blog, I just wanted it to be an outlet for my creativity,” Joyce said. “Instead of concentrating on building numbers, I concentrated on making it—and my homes—as beautiful as possible. I didn’t envision it growing into what it has become. Some things just happened.”

Currently, she is working on the launch of a book on French farmhouse style that will be released in September and developing a line of home décor in conjunction with her favorite non-profit, Summerhouse, a Houston-based organization that helps young adults with intellectual disabilities. The home décor line will be an integral part of her newly launched online store.

As the daughter of an oil company professional, Joyce had a nomadic childhood.

“My mom was a, creative type,” Joyce said. “My dad was a hard-bitten engineer type. I was an artsy kid who loved to draw, paint and daydream but was also good at math.”

They settled in Houston permanently when Joyce was in her teens.  When it came time to choose a college and a career, she told her father she wanted to be an artist. He told her, “You’ll have to eat oatmeal everyday because you’ll never have any money.”

Practicality won out, and she decided to be an engineer.

“After all, I was good at math, and being an engineer sounded like a solid, grown-up job,” she said.

She enrolled in the industrial engineering program at the University of Houston and like most responsible, career-minded students got involved in the professional engineering society chapter. Kevin, a Houstonite and an upperclassman in her major, was the president. Suddenly her phone began ringing. It was Kevin asking her to help with club business. Then she began bumping into him between all her classes. Soon they began dating. They married in 1983 choosing to make their home in Houston.

Joyce once remarked to Kevin she had never seen him on campus until he became a constant fixture between classes.  He said, “That’s because I put myself in your path.”

They both settled into fast-paced, high-pressure careers. Then their lives changed.

Elise, their oldest daughter, was born in 1993 with Down Syndrome and its attendant medical issues.

“Elise had to be tube fed to survive,” Joyce said. “I had a choice: hire a nurse or stay home and care for our precious girl. I chose motherhood.”

As the girls got older, Joyce got restless. First, she started a portrait photography business because she couldn’t find anyone to take good pictures of her family.

“I taught myself how to take pictures by reading books and taking a lot of really bad pictures,” Joyce said. “Going and doing things and learning from your mistakes teaches you skills in a way that taking a class can’t.”

She also launched an on-line photography class “before the world was ready to take on-line classes.”

Then she went to work in a furniture store because she thought she might enjoy retailing furniture herself. In the midst of maintaining inventory, updating the website and ordering furniture, she began writing a blog for the store. When the owner sold the business, Joyce mourned. “I’d developed a relationship with our online customers, so the thought of walking away from that audience made me sad,” Joyce said.

In the interim, she and Kevin had purchased property near Round Top and named it Cedar Hill Farm. She chose to continue blogging and repurposed the farm’s name: cedarhillfarmhouse.com .

“My path wasn’t necessarily straight, but every step—and misstep—along the way prepared me for what came next,” Joyce said.

The Road to Cedar Hill Farm
While Joyce wasn’t reared as a country girl, she was raised as a country cousin spending time with her aunts and uncles on their Oklahoma farms.

“I’m not sure I appreciated it at the time, but those experiences were the seeds that later blossomed into my love of rural life,” Joyce said.

When it became apparent that traditional family vacations would be difficult with Elise, Joyce began lobbying for a country home where the family could get away from the pressures of urban living.

“I wanted a place where the girls could free-range,” Joyce said.

Kevin was unconvinced. He kept asking, “What would we do in the country?” Joyce eventually made her case drawing on Kevin’s childhood memories of time spent at his family’s summer house in Black Mountain, N.C., a small town in the vicinity of Asheville.  Rolling hills, clear creeks and towering trees provided the topography of his memories. The local vibe was hip, artsy and free-wheeling.

“When we found our farm, the landscape reminded us of North Carolina,” Joyce said. The front end of the property is an open hill. The grass gives way to a tangle of trees and brush. A creek, bordered by 20-foot bluffs and littered with limestone boulders, transects the back end.

“Plus, Round Top offered the same mixture of small town charm and sophistication that made Black Mountain’s vibe so cool,” Joyce said.

They bought the property in 2009. Joyce said Kevin soon found out what country people do. “Chores,” she deadpanned as Kevin’s lawnmower roared in the background.

Evie was 13 when they acquired the farm. Initially, she was less-than-thrilled about spending weekends away from her familiar city life and her friends.

“In the beginning, Evie couldn’t even be in the same room with a fly because she couldn’t tolerate bugs,” Joyce said. “She had a long first summer.”

Now Evie is as enthusiastic as everyone else about time spent on the farm.

“Having the farm has been a bonding experience for us all,” Joyce said. “If we don’t get out here for a while, it becomes apparent that something is missing in our lives.”

[pullquote width=”300″ float=”left”]Having the farm has been a bonding experience for us all. If we don’t get out here for a while, it becomes apparent that something is missing in our lives.[/pullquote]

The family decided to sell the old, ramshackle farmhouse, which was on the place but needed a total renovation. In its place, they built a home that looks as if it has been part of the landscape since the 1840s when the original immigrants settled the region.

“Before the farm, my style was much more formal, a high French style” Joyce said. “After the farm, it is much more casual with rustic fabrics and softer colors.”

As she began designing the farmhouse, she worked from the inside out.

“You have to start where you live,” she said. “For instance, you have to have a bed in your bedroom before you have a bed on your porch.” These days she has a bed on her porch and one down by the creek. 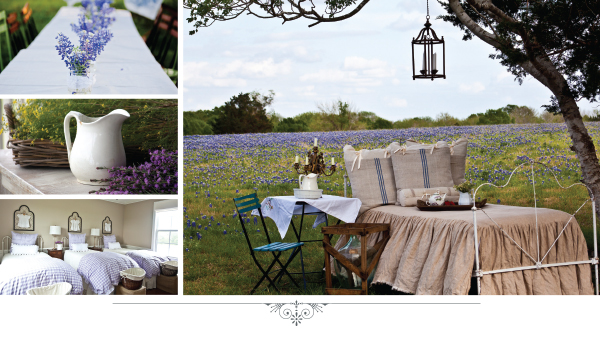 “The whole point of being in the country is to be outdoors,” Joyce said noting her favorite time of day on the farm is sunset and her favorite place in the world is the farmhouse’s 12’ x 50’ back porch. “I’d love to be a sunrise girl and capture that special light, but I’m not. I’m a sunset girl. I love sharing good food and wine with good friends as we watch the day end from our back porch.”

Another favorite pastime is walking the property and soaking up the peacefulness.

“There is something about walking around the property and knowing we own it,” she said. “With the ownership comes the responsibility—and joy—of making it better, so it is something that our children will continue to cherish and share with their own kids.”

Shooting the Breeze with Rick Perry